I’m excited to tell you about my new blog New Humanity Press Daily (NHPD).  I’m transitioning all of my energy updates and news about transmissions & my work to NHPD.  The Earth Hive will remain as an archive of the journey to a New Earth and a New Humanity.

NHPD reflects where we are as a New Humanity.  In order to do the work that I came here to do, it was necessary to build the Earth Hive, the geometric architecture and the intelligence of the New Earth life force that is now in place to nourish our planet back to balance and health.

NHPD is an outgrowth of New Humanity Press, a communication hub for receiving, transmitting, expressing and teaching the new Earth frequencies, Light codes, technologies and intelligences. 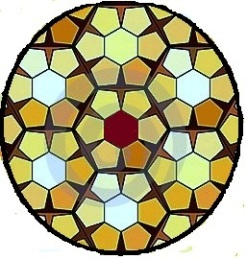 Listen to this Earth Hive update. (A note about the recordings: I am aware that for some listeners the podcasts play simultaneously.  This is due to some browsers overriding the html instructions to NOT play simultaneously.  I’m working on a work-around to prevent this.  I apologize for the inconvenience in the meantime.)

It’s been longer than expected to get this post out but the changes in the Earth Hive, the new Cosmic-Earth, Honeycomb Creation Field, have been so fast coming and magical that it’s taken a length of time to choose the most important information to share.  I finally got the nudge from Mother Earth and Cosmic Guides to lay some crucial groundwork about mastering the Cosmic-Earth Creation Field, also called the Cosmic Creation Matrix, a possible experience (or potentiality) of the new Earth honeycomb grid network.

Building up to and following the Star of David alignment in late July a number of light packages came into the Earth Hive grid to support the instant manifestation rhythm on the planet.  It was through the Star of David energy portal that a new Rose Body package descended from its cosmic orbit and released the information to create a physical presence on Earth.  What this has meant since the time of it’s descension is that the physical, material world is serving as an activator of New Earth creation, something we quite simply could call magic!  The process is quite complex, and while you do not need to understand how or even why it works, I’m going to share some of how this occurred to document it in here in the Earth Hive, as well as for all of us to consider how pre-creation stages are vetted and ultimately manifested into the New Earth dynamics.

Upon the descension of the “material” Rose Body all physical matter on Earth upgraded instantaneously.  The upgrade contains the New Earth Dream Worlds of the Cosmic Dreams and Earth Seeds, two light patterns discussed at length around the time of the Galactic Shift, as a unified web of all that has been dreamed by the Cosmic Dreamers.  Once upgraded into the physical plane on Earth, a new potentiality, or timeline of creation, was fully affirmed within Earth’s matter.  The Cosmic Dreams and the Earth Seeds became unified into one whole Earth “picture”, or projection, that is driven by the patterns of the honeycomb design and the new flower of life.  What’s fascinating about this development is that quite suddenly it is the “material” or matter that can now provoke activation into the Cosmic-Earth Creation Field (rather than the perspective that I believe many of us lightworkers, starseeds, etc. carry that the creation is all from within).  For a “moment” in time/space we passed through a reversal, or information exchange transits, where the inner changed to the outer, then the outer became the inner and now we are unified (inner and outer) into a whole field of unified creation.  Thus, the process of transmutation upgrades to a process of mutual information exchange between all levels of creation much like two computers merging their databases so that both hold the same material and at the same time merge any duplications and discard outdated information.  We are mutually exchanging information between all that surrounds us, and as a result, there is an acceleration of new intelligence and capabilities.  The process is equivalent to a baby learning to eat on the first day he or she is born and being able to walk on the second day.

After the Star of David alignment, we woke up as Masters and are discovering that we have all the tools and resources we need to carry out the tasks we’ve been given, which no longer seem so far-fetched.  So long as intention and desire are present, the physical dimension is 100% prepared for us now.  Again, the complexity of how this works is mind-blowing.  The old material reality still exists, yet, with the “material” Rose Body upgrades we are being poked by our material reality to unify with it at a new level of creation and vibration.  In any given present moment, the material reality around us is actually moving in and out of dimensional spaces/timelines.  We are making choices now about where to join our material world and it is the material, the matter, that in many cases is serving as the catalyst.  Because of this we have SOOO much more support in co-creating as formed matter is literally “popping” with new creation.  Our role as a co-creator in this stage (because God only knows what will be next!) is more that of a Guardian Presence to the material (this includes the entire manifested/seen/visible/formed world) which says to matter “I want this to be created” and the manifestation pops out of the form.  This is an important nuance to understand when compared to previous creation processes.  The new process requires our full presence in space and place and the transition of the imagination to the outer reality rather than an insular experience within the mind or heart.  Everything is the realm of the imagination now.

The “bubble” of the New Earth Dream Worlds is expanding to where there are more and more “safe zones” globally for love-based co-creation to be fully supported.  The strength of the Rose Body in its material form is what allowed for such incredible continuity of creation to transpire in the last three to four weeks.  There has been a wave of new activations across the world that “tightened” the circuitry of the Earth Hive allowing for greater communication across the grid.  Each Cosmic Dreamer, or activator, occupies their own creation platform, an energy field that works through the honeycomb (networked hexagons) coding.  With the Rose Body material upgrade we can now “read” our physical environment newly and our physical body begins to act much like the bee with heightened sensory perception of the notations of physical life systems around us.  We are both the flower of creation and the honeybee of pollination.  It is this new perceptive ability that teaches us how to be harmonizers for Nature, as well as assist Her in “popping” the new life forms she requires.

Through this new attunement we are communicating more rapidly to one another through means outside of the verbal but rather through Nature.  Nature is the new “telephone” system that facilitates rapid exchange of information across the honeycomb grid.  The communication can come from a uniform species like the Rose, dragonflies or bats (two particularly active communicators right now) or a collective consciousness of “Nature pods”, which in my observations are generally tipped off from the floral kingdom where pre-creation consciousness is wired to release Nectar-based life.

In this next phase of Earth Hive crystallization, the physical is going to be very, very important.  With the merging of the Dream World into the physical all that we are physically communicates our “information” (from our genetic make-up to our creation pattern/soul frequency) to the matter around us and vice-versa (we are receiving this information from the matter around us as well).  In mastering the Cosmic-Earth Creation Field, we allow this understanding to come through our higher intelligence.  We are quickly coming to the ability to download these understandings as instinctually as breathing.  As it becomes easier and easier to create these information flows, any one creation platform/activator/co-creator can make adjustments to the Earth Hive (which means the entire planet!) via the honeycomb coding sequence/dynamic by a heart pattern/thought being received or filtered through the Nectar Spiral.  I’m shown this as electrical charges, specifically the electro-magnetic frequency of the heart field, lighting up one hexagon/creation platform in the grid that then lights up another heart field.  This is truly not to be understated as it means any one individual can shift the entire consciousness, or physical condition, of the planet by engaging in Nature telepathy and responding with an act of harmony.

New Maintenance of our Physical Form

Interestingly, this means that the physical nature of our existence here is becoming more important.  To co-create on Earth we must be in a physical body.  Even more enlightening now is that it is the very nature of that physical-ness that determines the effectiveness of the “popping” of the Dream World.  For the specific co-creator consciousness that I transmit and “Mother” here on Earth, the physical form is regarded as the Angelic Human that ultimately reveals a new type of “translucency” matter.  This form is both crystalline, liquid in light, Rose Body infused and powerfully magically in mastering the elements of all creation.  This is a design of the “designers” blueprint that can work with the nature of light to “bend” creation into new forms.  We are coming into full physical form now and that requires a new nurturing practice to maintain the translucency of our matter.  You may discover that it’s time to upgrade your physical practices for tuning and re-aligning your physical matter.  Take note of what appeals to you and allow yourself to re-learn what your body requires.

For those that feel there is still a “lift-off” moment that you are waiting for, I encourage you to listen to the last Earth Hive transmission, The Sacred Covenant of the 13th Disciple to receive the divine feminine Christ Consciousness coding for your Earth-Star mission.  I understand that we are still in the window of activation for this and the time is very ripe!  Until next time, take care, Beloved Bees, Co-Creators and Cosmic Dreamers!